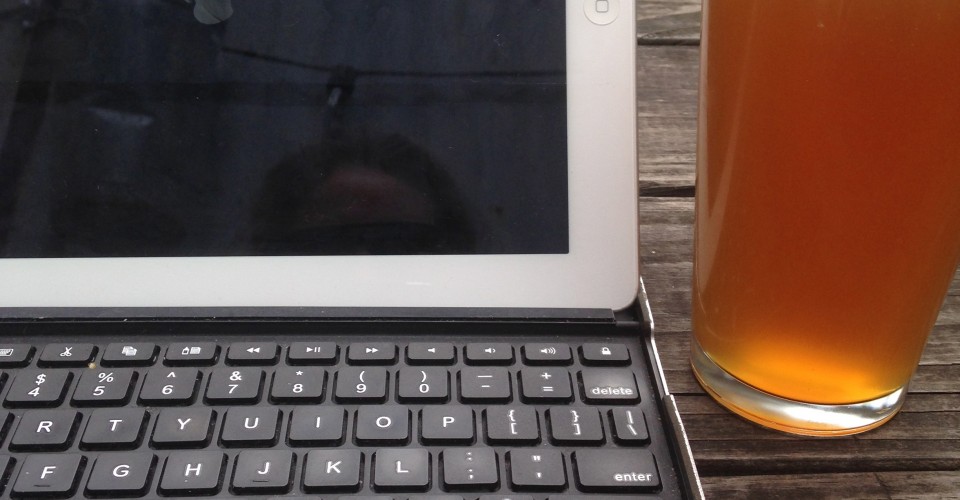 It is a beautiful day in the BK today which means that I wanted to get as much fresh air as possible. While I have the luxury of having a lovely terrace off of my bedroom, it is in full sunlight during the afternoon which often makes it difficult to do anything but sunbathe and/or drink during that time. My laptop gets too hot so work productivity on it was out of the question. Instead I ventured over to Bierkraft in Park Slope which has been a destination of mine long before you could get beer on draft or enjoy said beer in their lovely backyard. There aren’t many coffee shops that I know of with outdoor space, so I opt for bars instead. I’m not an iced tea drinker and coffee, even decaf, at the late afternoon hours can be very problematic for me. Bierkraft has an outdoor space off the back of the store with long communal tables, umbrellas and good tunes. I knew that they had a Speakeasy tap takeover last night so I was expecting to be sipping on one of those San Fran brews, but to my delight there was an OtherHalf IPA on tap that I had yet to try. I asked for a taste, as well as the alcohol % as I didn’t want anything that would actually effect my working capabilities. I was told 5.5% but there was no way, my guess is closer to 8%. Either way, I can hold my own so all good. OtherHalf is based out of the BK and I actually know one of the wonderful gentleman involved. They recently opened a tasting room that I am shocked I haven’t gotten to yet, but for now, I’m delighted to be seeing and drinking their hoppy brewskies all around town. I was going to make a cheesy comment about Hop Showers raining on me but I just couldn’t think of a a clever way to do that right now. If someone does, please let me know.


Tags:  Beer Bierkraft IPA Other Half

This site uses Akismet to reduce spam. Learn how your comment data is processed.