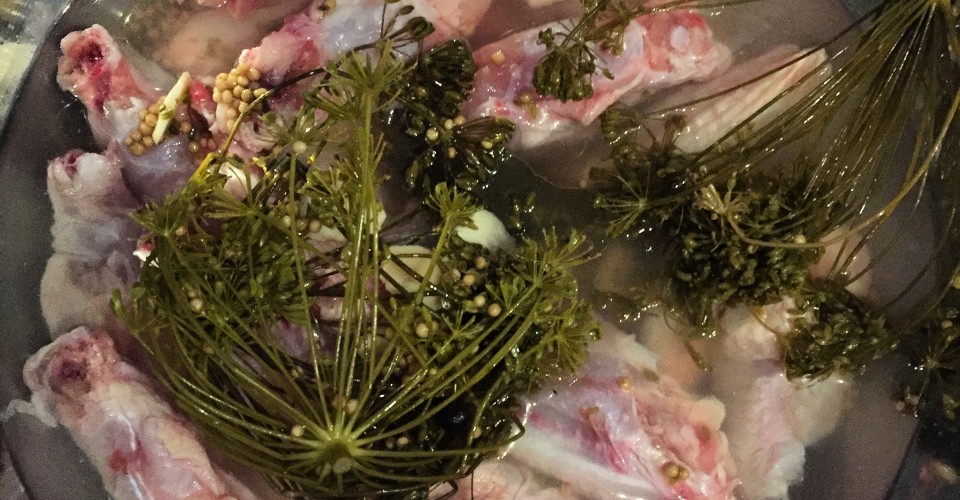 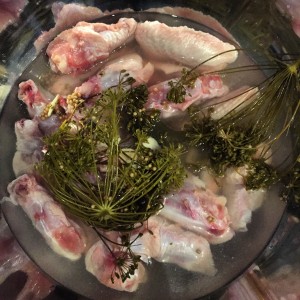 Wangs. This is what my boyfriend Alex, fellow chicken wing lover, likes to call them. While I had never referred to them as wangs, wings are one of the things that solidified our relationship. Our expression of shared love for them was truly a special moment and I’m pretty sure I captured his heart when upon enjoying wings for the first time together, I gnawed the meat off those bones until they were completely clean. After all, this is the proper way to eat a chicken wing. During the early weeks of our dating we enjoyed many a wings, so much so that upon making the decision to move/live together in Cincinnati, I declared that we would have a wing Wednesday as a weekly tradition! Real life kind of got in the way of that being a regularly scheduled thing, but we have enjoyed home-cooked wangs quite a few times. The picture above is from a recent batch that I am ranking as the best wings I have ever made at home and the reason for this was the 24hr pickle brine they rested in before being roasted off in the oven. While an outdoor grill would certainly be a good option, when making wings at home I have always used the oven. I have baked and broiled and done a combination of both in order to get the skin dark and crispy (that is where the broiling typically comes in), but since we got a new oven with convection settings, I have been using the convection roast option, which seems to cut the cooking time from about 45 mins to 25 mins when set to 400F. Part of the temp and cooking time is learning about your oven and how it cooks, it just takes practice, which means continually cooking chicken wings at home and now highly recommended, involving pickle brine. I have always saved my pickle brine as there are just so many things to do with it! I have often used it to brine pork chops or as part of my cole slaw marinade, but has also come in handy for making dips, dressings & cocktails.

Pictured above is a pack of chicken wings I had purchased from Whole Foods. I find that their pine manor brand is the best wing I can find on the regular here in Cincy. I have also purchased them at Farmer’s Markets, but with it being winter, those are even more difficult to come by and if you decide you want to make wings for dinner at 2PM on a Tuesday, chances are slim to none that you will be tracking down that farmer. Also, sadly, quality butcher shops that will have wings are hard to come by in Cincy. I used to buy mine at Fleisher’s or The Meat Hook in BK, which are high quality stores that I very much wish had a parallel here in OTR (Over-the-Rhine) which is the area we live in. Anywhoo, back to that pickle brine. So I just took the wings, but them in a stainless bowl and poured a pickle free jar of Polonaise pickles over the wings. As there wasn’t enough liquid to cover all of them, I added some water and some rice wine vinegar, sealed the bowl in plastic wrap and let rest in the fridge until the next afternoon when I wanted to cook them. I had no intention of eating these at the time of cooking, which was shortly after my lunch time, as I was making them so that they were ready for Alex when he got home from a business trip, but upon tasting one finished wing, I proceeded to eat 12 more off of the cooling rack-fingers burning as I tried to pick them up-as they were just that good, very much thanks to the pickle brine whose acid, sweetness, garlic & spices were all lingering in the meat.

Luckily for us, and for other local Cincinnatians, when I’m not able to procure the wings or defrost the staple pack I now typically keep in the freezer, on time, we have two great places in the ‘hood, KnockBack Nats & Pontiac BBQ. Both are smoked wings, a technique I probably won’t be playing with until we have a backyard. Knock backs has a variety of sauce options though we order them plain with the sauce on the side as the wings are just delicious on their own and Pontiac does a more classic BBQ sauce. While I don’t have pictures of either of those, below are captures of some of our favorite wings we have enjoyed together. As I am writing this I am now realizing how appropriate this post is considering super bowl Sunday is just a few days away, but I will strongly encourage you to enjoy wings all year round and remember to honor thy wing as there is no poor etiquette when it comes to wings, except leaving a lot of meat left behind. 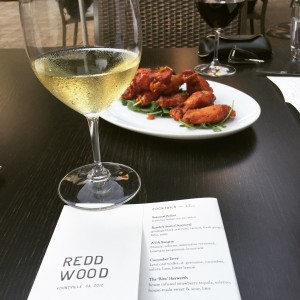 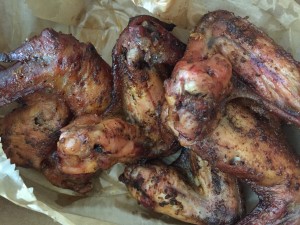 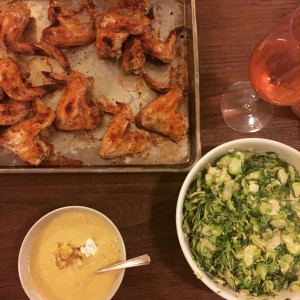 First wings ever made at home, with brussels sprouts slaw, creamed corn and rose 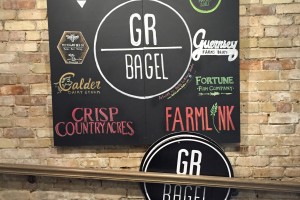 I have been making weekly trips to Grand Rapids (or GR as I am told locals call it), and have been having a blast exploring...
Back to top