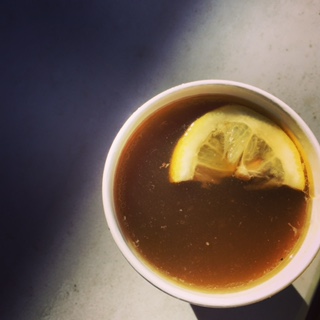 Yes, that is a real thing and yes, it is amazing. It is essentially just really wonderful Chicken broth from Zingerman’s Deli that they put in a to-go coffee cup (small or large), and title it the brilliant “Chicken Latte.” I started buying their pints of chicken broth a few months back when my acupuncturist suggested that I start drinking bone broth. I had trouble securing the bones and was just working so much that I knew I wouldn’t actually make the broth, so I figured broth from a good Jewish deli was the next best thing. While I am totally fine drinking from a pint or quart container, a la back of house kitchen style, my mind was blown when I discovered the Chicken Latte as it really makes drinking broth WAY more sociable. I have been drinking it regularly (though just starting adding a slice of lemon to it-game changing!), and as the days start to get a bit warmer, I know that the season for Chicken Latte is coming to an end and that one day in the near future I will walk-in and they will no longer be being poured, but they got me through my first Michigan winter and will certainly be a cool-weather staple for a long time to come. Also, knowing the brilliance of Zingerman’s, I am sure it will be replaced by something cooling, refreshing and equally as delicious for the warmer months to come.

Meet Kate Hanley. Kate is a Ms. Mindbody. Kate is also love. Now that might sound a little odd, but it is what I believe...
Back to top